THE Zambian duo, Fide Master Geoffrey Luanja and compatriot International Master Gillan Bwalya (Elo 2277), emerged joint winners of the 2018 Zimbabwe Easter International Chess Open, which ended in Harare on Monday.
BY SPORTS REPORTER
Luanja, based in South Africa, with an Elo rating of 2276, was the tournament top seed and was largely expected to win the event.
The two players garnered 7 ½ points each to share first place honours and split the $1 000 prize money to take home $500 each.
The Zimbabwean field, which was led by current Zimbabwe Men’s Chess Champion, Zhemba Jemmuse (Elo 2140), Emarald Mushore (2144) and Spencer Masango collapsed midway through the tournament and none of them made it into the final line up of the Open section, which was dominated by Zambian and Botswana chess players.
Another local favorite, former national champion and candidate master, Dion Moyo, only managed to scrap into joint seventh position with 6 ½ points from nine rounds, together with compatriot Elisha Chimbamu. The surprise packages from the Zimbabwe lineup were 19-year-old scholar, Tapiwa Chikwavaire and UZ medical student, Blessing Murasiranwa, who garnered seven points each and managed to share the spoils in third place with another Zambian, Timothy Kabwe and Pudungwane Lesole from Botswana.
Zimbabwe Chess Federation vice-president, Clive Mphambela, who was the tournament convenor, said that the result of the Easter Open showed that a lot of work still needed to be done in order for local chess players to catch up with their regional peers.
“We have our work cut out as the Zimbabwe Chess Federation. We cannot continue to come second or third to Zambia and Botswana. We need to up our game,” he said.
“We have a vibrant school chess programme, which produces good chess players but the players tend to drop into oblivion after leaving school. What we need is to

put attractive measure to harness the talent that leaves the school and university system into the national senior chess teams.”
Zimbabwe had better fortunes in the ladies categories, where Kudzanayi Charinda amassed eight points from nine games to emerge the winner earning herself a $250 cash prize.
Charinda’s fine run, well ahead of top seeded lady, Colletta Wakuruwarewa, cemented her position as Zimbabwe’s top lady after she also scooped top honours at the Zimbabwe International Chess Open in January this year.
The win guaranteed her place in the Zimbabwe ladies chess team that will take part in the 44th World Chess Olympiad in Batumi Georgia, from September 24 to October 10, 2018. Wakuruwarewa scored a distant six points to share joint fourth position with Desideratta Nkhoma from Malawi. In second place in the ladies section was Tatenda Zengeni, whose consistency during the tournament earned her 7½ points also from nine rounds earning herself a $150 cash prize.
In the scholars categories, Master Rumbidzayi Mawire a Grade 7 pupil at Avondale Primary School earned $70 in cash after emerging as the best junior aged under 20.
Murinda Anashe was best scholar, while Goromonzi High School and Advanced Level pupil, Nicole Mphambela emerged as second placed pupil.
Tendai Gotora was the oldest player in the event and won $50 for his efforts. 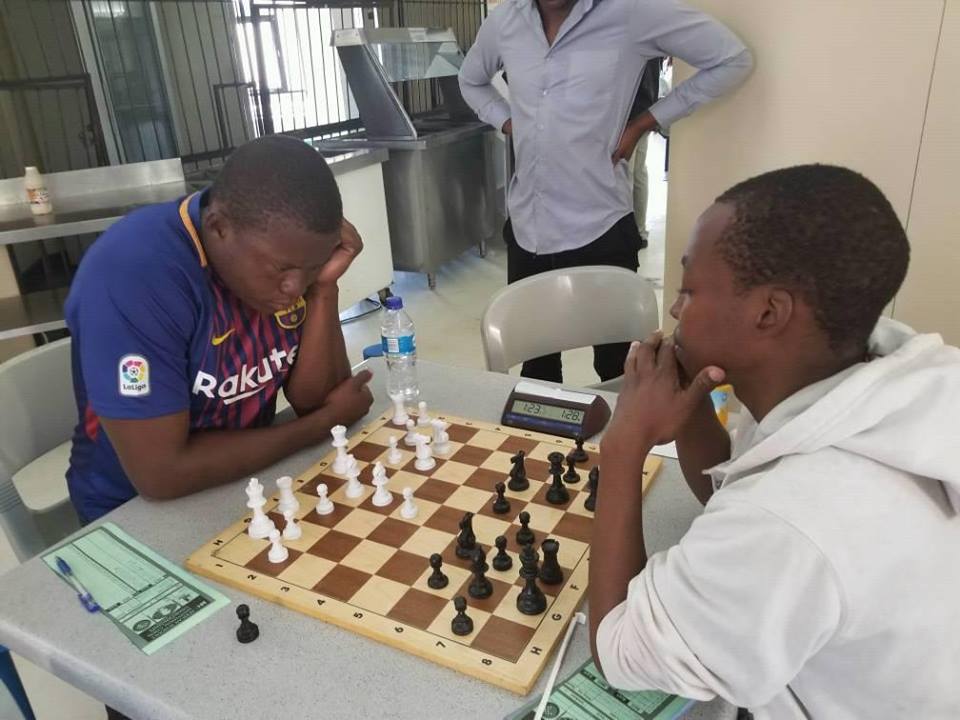 THE ZIMBABWE EASTER OPEN 2018 …ZAMBIAN PLAYERS FM LUANJA AND IM BWALYA WERE ON TOP IN THE MAIN OPEN SECTION..

August a great chess month!…Clash of the Titans